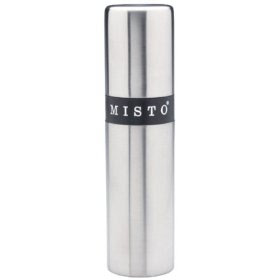 The other day I was in Los Gatos at Sur la Table, and a certain kitchen gadget caught my eye: the Misto olive oil sprayer. Misto is a refillable canister which can be hand-pumped to produce a fine mist of oil. After a week of using Misto, I am quite impressed with its performance and would recommend it to anyone who uses olive oil in home cooking. Here’s how it went:

I filled my Misto with olive oil and pumped feverishly until I felt too much resistance to continue. It is a pretty easy process, but after a while can get a bit tiresome. (You pump the Misto by pushing the cap up and down over the canister) If you have enough will to pump the Misto totally, the charge lasts for a few meals. Otherwise, you have to pump it each time you apply a mist. Overall, the pumping is the worst aspect of the Misto, but not enough to turn me off in comparison to all its positive benefits.

I like using the Misto to lubricate pans and baking dishes before cooking with them. The Misto produces a mist that works just as well as Pam or any other kitchen spray, but doesn’t have an unnatural taste or residue like those store-bought mists. I will even use the Misto to top broccoli or pasta instead of tossing the food with oil, as the coverage tends to be a lot lighter and even. I don’t really eat salad, but I imagine that the Misto would be an awesome substitute for too-rich vinegarettes if you added some balsamic to the salad and then sprayed a light layer of Misto over the dish.

I have begun to use the Misto almost daily in my cooking, and I feel like it has improved my diet a lot. My foods are less oily and taste fresher and crispier as left overs. I also can appreciate the money Misto saves by using less oil and saving me from buying cooking sprays. I am not sure if other oils can be used in the Misto, but it would be worth trying out. For about $10, I think the Misto is a great buy in all aspects.