On Saturday, November 20th, we raised $365 for Bounce For Life! Thank you to all of you who donated and for the well wishes from everyone. You all helped make my birthday week so much fun, truly an EXTRAORDINARY celebration.

Below you will find the “Victorisms”, the quotes from last week’s board that were attributed to me. You’ll also find the various playlists from throughout the week. Enjoy!

Victorisms
Enjoy!
Feel free.
Thank you for being here.
OR NOT is always an option.
Take your time.
Nicely done. (variations were: Nice work in that series. Good job in…. Etc.)
As you are ready.
Breathe.
How’s that?
Eventually.
Relax your glutes. Yoga should make you less of a tight ass.
Find yourself as you are.
Shall we flow?
Looks like you’ve had enough of that. (variation: That’s enough of that.)
Indeed.
Is that all you got?
I got nothin’.
Make the ordinary extraordinary. (variation: The ordinary is extraordinary.)
I have a couple of announcements.
Please park only in the customer spaces.

On November 19, 2004 I celebrated my 32nd birthday. That same day, one of my closest friends, Andy Martin, died as a result of Sino-Nasal-Undifferentiated-Carcinoma (a rare form of nasal cancer). Each subsequent year I have shared my birthday with Andy’s memory and the legacy of his life and work.

Mostly I have remembered and retold the story of Andy’s unique battle with SNUC and helped raise money for Bounce For Life, the non-profit organization dedicated to the continuation of the work Andy began researching his own cancer while a medical student at Tulane University.

While Andy’s story certainly has personal relevance to me, the reason I feel so compelled to share it each year is because of the broader lessons Andy’s audacity, courage, hope, and commitment can teach us all. Here is Andy’s story:

In the summer of 2000, Andy was preparing to attend medical school at Tulane University when he developed intense nose bleeds. He was soon diagnosed with Sino-Nasal-Undifferentiated-Carcinoma. SNUC is one of the truly rare cancers with fewer than 100 cases reported in the scientific literature. It is also one of the most malignant cancers, with a 100% mortality rate within 5 years. Despite the diagnosis, and perhaps in someway inspired by it, for the next 4 years, Andy underwent the rigors of chemotherapy, radiation, and surgery several times, while continuing in the medical school program at Tulane.

On the one hand, Andy was unnervingly confident that he could both beat this cancer and become an excellent physician. At the same time I believe that his rational mind understood the odds of his long term survival and that he calculated that spending his time in this pursuit, however potentially futile, was the best use of his remaining life. The inevitability of his passing sharpened his resolve.

While, to be sure, Andy’s battle was a personal one, he was not alone. When Andy lost his hair from chemotherapy and radiation treatment, his entire Tulane Medical School class shaved their heads in solidarity. On the occasion when Andy was almost guaranteed to lose his sense of taste because of an upcoming treatment, a wine-tasting party was held in his honor and Andy tasted his last drops of wine in the company of friends and colleagues. While the people around him came to give him support, I have no doubt that in many ways Andy’s courage and grace served as an inspiration for all of us who were lucky enough to be around him in those years.

Dr. Tyler Curiel was one of Andy’s professor’s at Tulane and became Andy’s mentor, colleague, and friend. Dr. Curiel was the Chief of Hematology and Oncology at Tulane where he ran a lab that specialized in immune responses to cancers. When Andy decided that he would rather, as he put it, “sidestep the clinical duties of a typical third year student and learn how to do the type of research that will further our understanding of SNUC,” he worked under the mentorship of Dr. Curiel.

Andy convinced Dr. Curiel to biopsy the cancer from Andy’s own body and Andy spent the rest of his life working with those samples. “If this cancer’s going to get me, damn it, I’m going to go down fighting, you know, and make a difference, so that future people who are diagnosed don’t have the same outcome that I had.” Andy’s work generated the only known living cell line of SNUC in the world. While research on this cell line certainly may one day inform the treatment of SNUC, its implications are much broader. Because SNUC is such a deadly and ferocious form of cancer, clinical treatments that either prove to slow or alter its development may be gateways in to treating more common forms of cancer. The value of a living cell line for this type of research can not be understated. If nothing else, and even if no treatment ever results from this research, Andy’s persistence, passion, and personal sacrifice will continue to serve those who watched him work and those who hear his story.

Bounce For Life, created while Andy was still alive, was originally a way for Dr. Curiel to help raise funds for the research by breaking a world record: he dribbled a basketball for 24 hours straight while running 108 miles. The organization continues now to help fund the research that Andy began and keep his cell lines, story, work, and legacy alive.

To Support Bounce For Life or read more about Andy go to www.bounceforlife.org.

On Saturday, November 20, 2010 I will teach my regular 10:00 a.m. Intermediate and 12:00 noon Beginning classes. They will be a celebration of my birthday, friendship, and Andy. Feel free to come to class, or just stop by for cake, between classes at 11:30 a.m., or after the second class at 1:15 p.m. We will also collect cash and check donations for Bounce For Life. 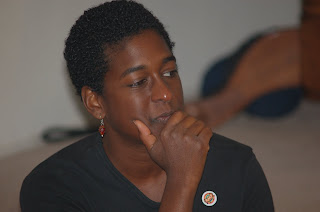 Most Thursday’s she’s in the office seeing clients who need after work hours appointments, or taking someone on a guided grocery shopping at New Leaf/TJ’s/Staff/Whole Foods. Tonight she was in Monterey at CHOMP giving a presentation for the American Cancer Society, “Fight Cancer With Your Fork.”

Until February of 2009 Jocelyn worked part time at the Monterey Bay Oncology Center doing in person and phone consultations with cancer patients. In that capacity she mostly helped patients find foods they could keep down during chemotherapy, find nutrients to support getting well, and for some simply find joy in one of the basic pleasures of life during their transition into death.

Tonight, the spouse of one of those patients came to the presentation in order to meet Jocelyn in person and share how much the sessions his wife had had with Jocelyn in the last weeks of her life had meant to them and their family.

While she told me this my eyes swelled with tears. Tears of pride (I am so proud of my wife). Tears of sorrow (suffering and loss). Tears of gratitude.