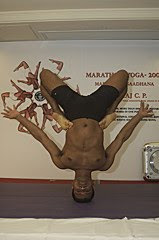 I read a theory once that suggested the main reason for watching sport, be it soccer, the Olympics or surfing on Steamers Lane, was the desire to see humans go beyond what we think is physically possible. The writer argued that the best moments in sport were the days when you saw an athlete go beyond good and move into greatness.

Well, I know that yoga is not a sport and that the majority of us practice the activity for helping and healing oneself… but I read a story the other day about an Indian man who certainly seems to have made the move from good to greatness.

On June 14th 2009, Mr C Poovendran set the world record for longest yoga marathon when he performed yoga for an incredible 28 hours!

While attempting the world record, Mr Poovendran performed 1019 asanas and also sought to entertain the spectators by drinking water and taking off his t-shirt… while performing a headstand… with his eyes closed!

Now admittedly on first read this story seems a little shallow. The breaking of world records is something that tends to take up the last five minutes of local news broadcasts and this seemed no different. However, when I learned a little more about his life, I began to think about it a lot more.

Mr C Poovendran is currently a yoga teacher who works in Hong Kong. He started his yoga training with his father at just five years old. By the time he was 14 he gained his first yoga award – the yogaraj… or King of Yoga. He has also gained the Best Demonstrator Award at the 5th International Yoga festival, the Yoga Rathna award (jewel of yoga) from the Divine Life society of Chennai, India, and the Creative/Innovation Award in 2006 from Pure Yoga International.

So clearly, Mr Poovendran is not someone looking to have his five minutes of fame by breaking a world record. This is his passion. To take something you love and push it to the very limit must have been very hard. I would imagine that practicing yoga for 28 consecutive hours has a fairly negative affect on your physical and emotional state (so don’t worry, we won’t be extending our class times here at NOURISH). I think I would be afraid that the effort alone would scare me off from every wanting to do a tree pose again. But for Mr Poovendran yoga is clearly more than an activity – it is his life’s work and his commitment to it is something I cannot help but be inspired by.